There is some overlap between Hideshow-mode and Outline-minor-mode. The latter is mainly for folding and navigating nested Org-like headings, but can be extended with the Foldout library. (Also included in Emacs!) The former works well to hide nested blocks of code. Both libraries use regular expressions and only support a few languages out of the box, so tree-sitter based folding is going to be a welcome addition whenever it arrives. But that’s a story for another day. Today’s problem is the user interface, which is independent of the folding backend.

Here’s the keymap for folding-related functions in the two modes:

This is irritating on two levels.

The former is easily rectified by rebinding keys or defining a transient/hydra menu, but the latter takes more work. Designing a better interface to Outline mode’s folding functions was one of the original reasons for the creation of Org mode, which did a bang-up job: There’s no learning curve to cycling Org headings with TAB. It just works and there’s nothing to look up or remember!

As of Emacs 28, Outline-mode and its minor-mode variant have acquired outline-cycle, a convenient fold cycling function inspired by Org. If you’re on an older Emacs, there are packages for this: bicycle and outshine. For Hideshow mode there’s hideshow-org, but this bugged out for me because it makes assumptions about the behavior of my already overloaded TAB key.

So I took a crack at making a simple Org-like one-key interface to Hideshow.

(Direct link to demo if the embed fails to load.)

Here’s how it works (bind it to whatever, it’s C-TAB here):

I find myself calling hs-cycle with a numeric level as the prefix arg all the time to get a top-down overview of code at different levels of detail. Here are three views of the same function, folded and unfolded to levels 2 and 4: 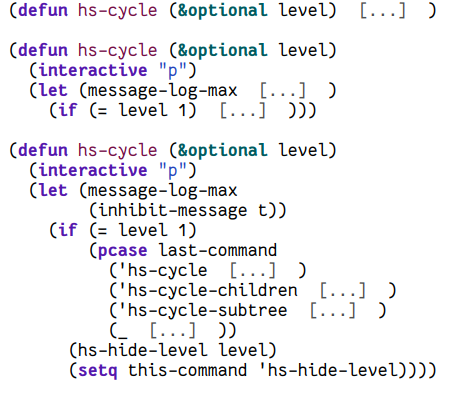 I’ve copied this from somewhere and this seems to simple enough to map and remember for hs.